RFu-328 with RFM69CW and Thermistor coin cell board

As I've been moving from Ciseco's radios to HopeRF's RFM69CW's, my XRF + thermistor sensor from Ciseco needed to be "converted" as well. As RFµ-328 has the same footprint as XRF (except it's "sticking out" from the pins at the other end), with similar pinout (GND, VCC and some input/output pins at the same places), I thought that I would just replace the XRF with a RFµ-328 with a proper firmware. Success! 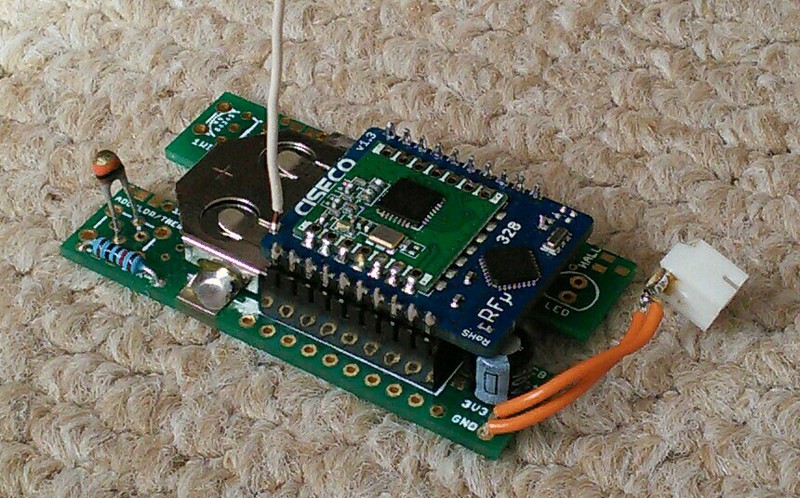 The only thing is that it now doesn't fit into the supplied box as-is, since the part of the RFµ-328's PCB that "sticks out" now interferes with one of the box's acrylic columns that holds the lid. The solution is to just remove this column from the box and the lid.

The thermistor firmware I wrote ~~is here~~ (UPDATE 2018-06-12T23:41:20 - no longer exists. I still use some modification of this board, but with radio protocol/settings compatible with Jeenode Zero. For code try here.). It reports the temperature and voltage in the JeeLib/JeeNode style packets. It hasn't been running for long enough to estimate the battery life - I'd expect it would be worse than with the XRF, since it powers an atmega328p + RFM69CW (which is a bit more power hungry than XRF on the default "full power" setting).

Ciseco is out of business and the web has disappeared.