A shield for Stephan's fantastic AVR stick is in the works! It has the same format as the AVR stick itself, 5cm x 2.5cm. I want to use the AVR stick as an encrypted "mass" storage, so the features are

NOTICE: I've got plenty of PCBs left, so if you'd like one, ask me by email {vtakovina [plus sign} flabbergast {at sign] gmail (dot character} com}. I can send you one for $1 plus postage (from UK). I also have some parts left, so if you'd like those (cap, resistors 2x1kR 1x4.7kR, button, blue LED) as well, add $2. You can also have one ATSHA204A for an extra $1. Unfortunately I have no microSD sockets left - so you'd need to get one yourself. 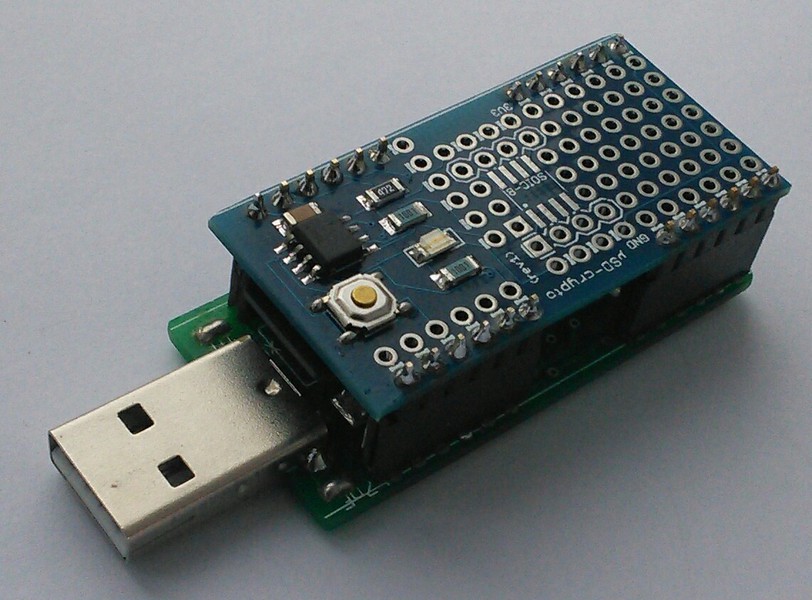 There was a lot of space left, so there's 5x5 PTH prototyping area, SOIC-8 and SOT-23 landings broken out to PTH holes and all the AVR stick's pins are also broken out to PTH pins. This can be used in variety of ways, for instance for temperature sensors (SOT-23 or PTH), IR transmitter/receiver (PTH), real-time clock (SOIC-8, with battery backup in the PTH area), extra buttons or LEDs (PTH)... (Note that the SOIC-8 landing is for the narrow (JEDEC) version; the wide version doesn't quite fit.)

Here are the EAGLE files.

Here are some rendered images with annotated layout (click to enlarge): 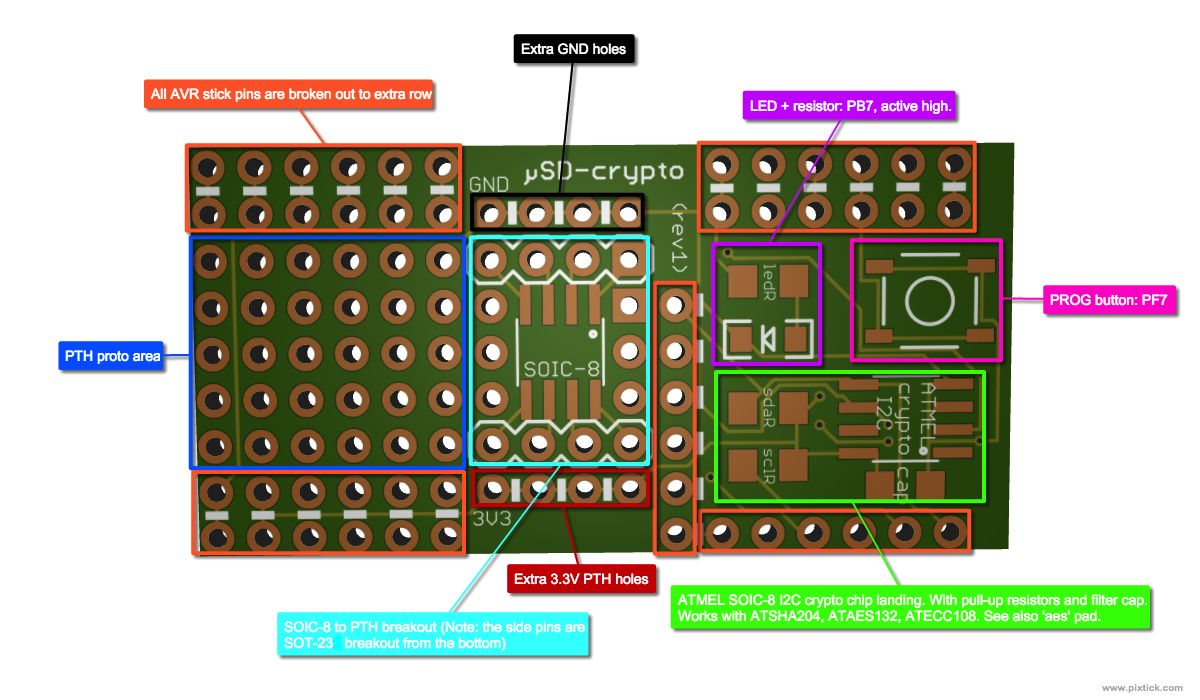 Pictures of the real thing 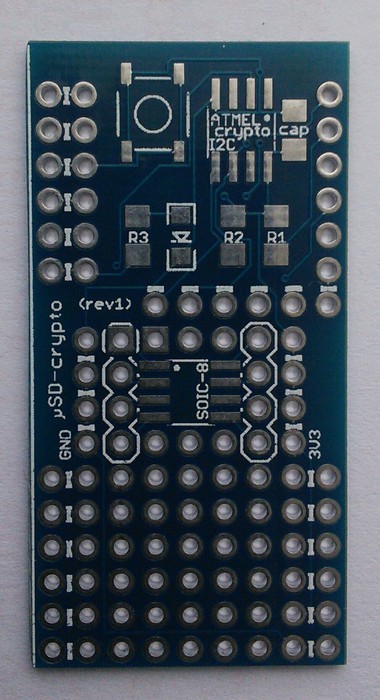 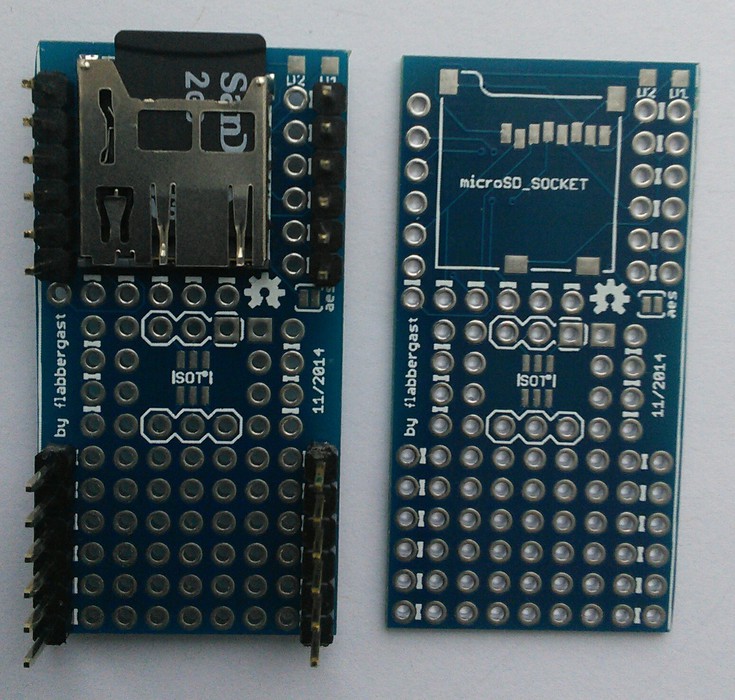 The connections can be seen also from the schematic below, but here's a summary:

One thing to be aware of is that pins PB6 and PB7 are a part of JTAG interface (by default enabled by Stefan). So JTAG needs to be disabled if one wants to use the LED (can be done in firmware). 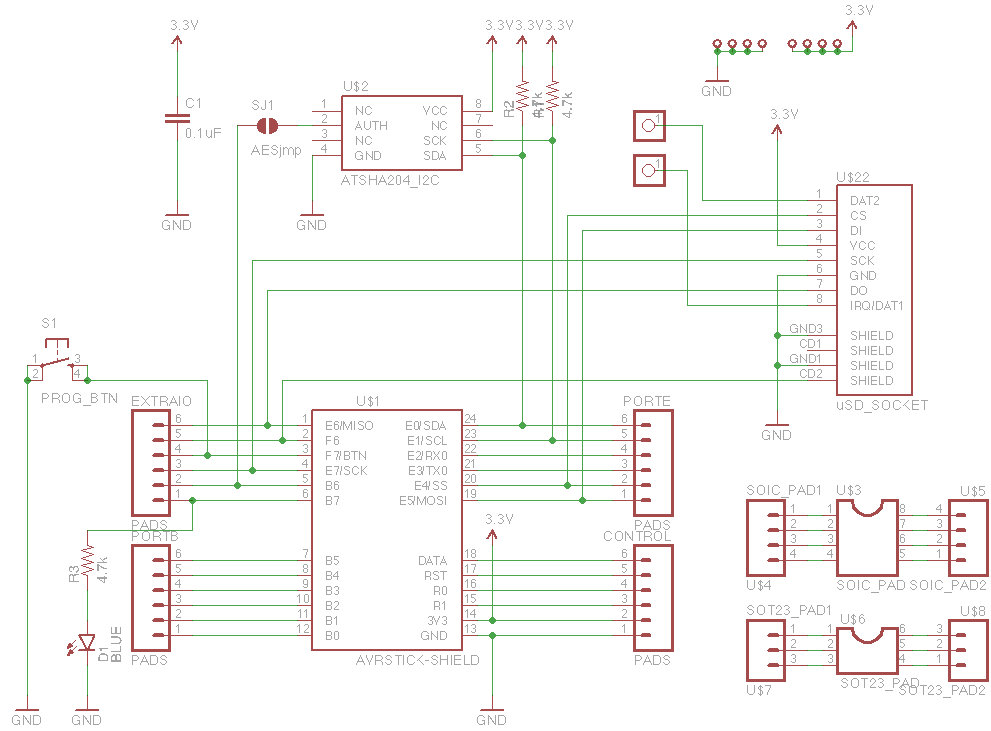 The shield can be mounted on the AVR stick either on top (in which case it needs to clear the electrolytic caps - a standard pair of female-male headers to make the shield pluggable does the job), or on the bottom, in which case the button on the shield is unusable (but then one can use the original PROG button for the same functionality).

One a bit unpleasant thing is that both the button and the microSD socket are on the "computer"-end of the stick (i.e. the one with the USB-A male socket). The reason for doing it this way is mainly that both SPI and I2C pins are on that end of AVR stick, so putting things on the "proper" end of the stick would require a lot of routing through the "proto area". I didn't want that. Another good thing is that it discourages from changing the microSD card while the stick is connected to a computer.

The rev1 version uses parts from Sparkfun - which are not the cheapest (by far), but can be ordered easily from several online stores in Europe in small quantities.

Note that CryptoCape is a cape for BeagleBone Black that has all these ATMEL crypto chips on it, along with an atmega328p (i.e. "Arduino"), so it looks nice to try!

To follow up on my first post about the enstix firmware (post here), I've updated my firmware (making AVR stick into an encrypted storage) to use the microSD for storage, instead of xmega's flash. With a microSD, it also works on other ATMEL chips with USB support, for instance atmega32U4 (Arduino Leonardo). It's still work in progress.